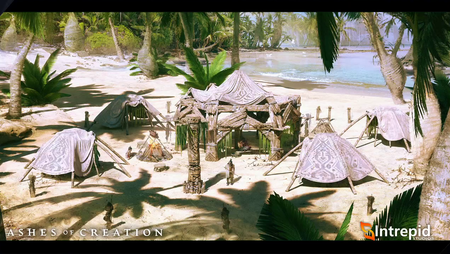 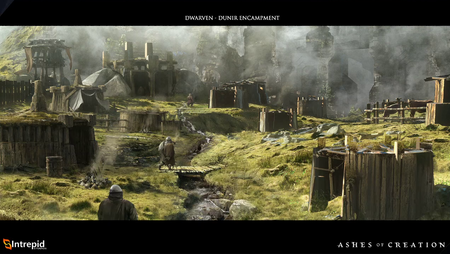 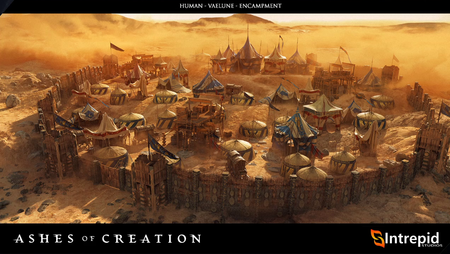 An encampment (also referred to as Camp[4]) is the second stage of node advancement.[5]

Once an Expedition becomes an Encampment, the group of NPCs grows in number, and more semi-permanent structures are in place. The Development Area feels a little more lived-in at this level, occupied with what people could build with wagons and simple tools - larger tents, smokehouses, and buildings constructed from local materials.[6] – Margaret Krohn

Illustration of node advancement from Wilderness (stage 0) to Metropolis (stage 6).

Nodes advance by collecting experience from the actions of players nearby. As players complete content inside of a Node’s Zone of Influence (the area around the node), they contribute that experience toward the Node’s development. The experience given to the Node may then be modified based on certain Events and Accomplishments. When a Node reaches the experience required, it undergoes the process of advancing to the next stage. There are a few exceptions where a Node cannot advance even though it has the required experience - most commonly, a Node can not advance if a Node is a Vassal of another Node and would advance to the same stage as its Parent Node.[6] – Margaret Krohn

Citizen and non-citizen player activity (questing, gathering, raiding, etc.) within a node's ZOI counts toward that particular node’s advancement (progression).[7] Nodes have seven (7) stages of advancement, with experience thresholds for each stage. When a Node reaches the experience required for its current stage, it advances to the next stage.[8] 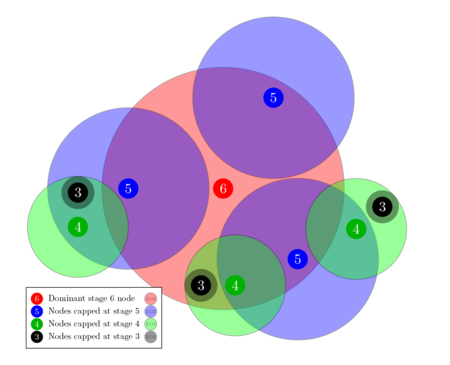 The advancement of a node unlocks its unique content, which comes at the cost of locking out an increasing ring of neighboring nodes from progressing to the next stage.[10]

Different people have different resources invested in nodes progressing and it would be a little "gamey" if you could know exactly what was necessary at that point because that would disincentivize people from participating.[14] – Steven Sharif

Nós greater than stage 3 (Village) enslave nearby nodes, converting them into vassal nodes.[8] 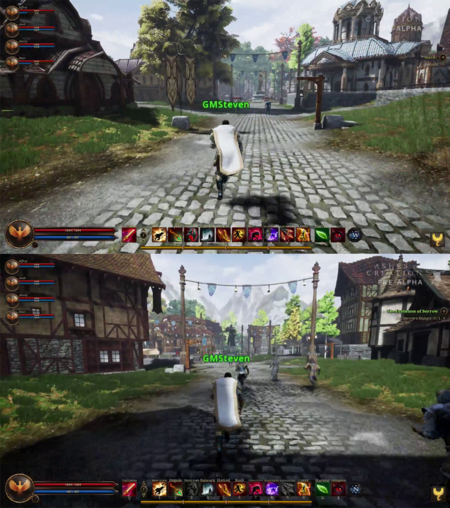 The layout and architecture within a Node’s development area are determined by influential race. For example, a stage 3 Node with the majority of player contribution being Py’rai would have a Py’rai village with Py’rai architecture. Most NPCs would be Py’rai elves, and offer questlines within the Py’rai narrative.[8] – Margaret Krohn

Each player’s contributed experience is flagged with their character race and other identifiers. When a Node advances, the race with the highest experience contribution determines the Node’s style and culture. This style and culture change can happen at every Node Stage. For example, if a Node advances to Level 2 - Encampment Stage and 51% of all experience was earned by Ren’Kai players, the Node will be a Level 2 Ren’Kai Node. If that same Node advances to a Level 3 - Village Stage Node, but the Py’Rai contributed 62% of all the experience earned, then the Node will be a Level 3 Py’Rai Node. Cultural influences bring more than just the aesthetic and storyline changes - benefits are granted to the dominant culture within that Node’s Zone of Influence.[6] – Margaret Krohn

Node layout and style is determined by several factors:[16]

There is an attrition mechanic that affects experience and influence to curb a single race from dominating the entire world.[20]

There is an attrition and that attrition on experience and influence is heightened based on the performance of the race in the world. So if all these nodes are Orc nodes then their attrition rate is very high to compete with the cultural establishment of new nodes because they have more influence in the world and a popular opinion is against them in their outlying regions that they do not have influence in.[20] – Steven Sharif

Legion monster coin events are common events that occur for Nós up to the Village stage. This might include a horde of zombies rolling across the countryside finding something or someone to feast on. Players who wish to keep their advancements will need to be vigilant.[21]