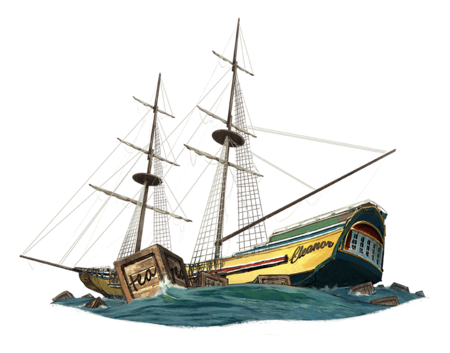 Ships will scale in size:[2]

Sailing will be pretty in-depth and it's going to be based on the size of the ship that you're using. So there will be components for seamanship that other players you will need to have on board if you want to operate a vessel to the best of it's abilities: Let's say in combat or traversing just the world.[4] – Steven Sharif

The prevailing thought among the developers is that ship navigation may be through the use of a spyglass that gives direction and skims the horizon, as opposed to "radar" navigation.[5] Ship physics may be simulated to avoid performance issues.[6] Ship assets will likely be released leading in to Alpha-2.[7]

Ships are divided into classes of vessel, which relate to their capabilities in battle and in transportation.[8]

Ships have their own class of vessel and the class that is related to the vessel has a certain purpose both in battle in PvE raids, in transportation.[8] – Steven Sharif

Galleons are a class of ship in Cinzas da criação.[9] 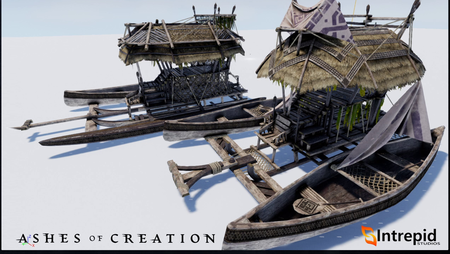 Caravans are capable of transitioning from land to naval caravans. So if you start out as a land-based Caravan and you move to the coast and you want to move into the water there's gonna be a little transition period there; it's gonna be a little construction kind of site: You're not gonna have to do anything it's just gonna be a timer right so that you can't quickly move between land and water. It's gonna be probably in the matter of you know a minute to two minutes. There's a little bit of vulnerability in that regard.[12] – Steven Sharif

There may be fishing boats in Cinzas da criação.[15]

Ships can only be summoned from a port or harbor.[16]

You can summon your ships up but you'll need to summon them from land, which means that if something happens to your armada out at sea you won't have backups to just summon immediately in the middle of the fight... They'll have to do so from shore somewhere from some port or harbor.[16] – Steven Sharif

Players can choose which "joints" get populated with either utility or weaponry spots on a ship.[19]

Ships and Buildings will be able to be named. The custom name will appear as floating text when it is targeted.[20]

The user interface will allow emblems, logos and symbols to be designed in-game.[22][23][24]

The developers are now considering including image import functionality.[26] This was previously not under consideration.[22]

I know previously we had spoken about not allowing custom user images in the game, however I think we're leaning more now in the direction of allowing for custom user images. Absolutely well what it will be is the fact that we're a subscription game and if you want to jeopardize your account by doing the wrong thing with regards to custom users [images] then by all means you may do so and we'll have stringent practices in place to prevent that from actually being an issue.[26] – Steven Sharif

Mariner classes (also referred to as boatsmanship classes, boatsman skills or seamanship) contain different skill trees arranged in a similar manner to Aulas artesanais. As a player gains experience in these different skills they become more adept at using them.[27]

You can spec into and kind of create your own class based on what things you're doing on the boat... It's gonna be very similar to in structure to like the artisanship trees, so you'll you'll have your mariner class: You'll have different trees in that class.[27] – Jeffrey Bard

Combate naval involves different types of Ships with varying capabilities, armaments and roles to play out on the high seas. There will be a balance and counterbalance between ships from Pvp and PvE perspectives.[2]

Battles at sea will be epic. They will have some supreme rewards and/or losses if the battle succeeds or fails.[3] – Steven Sharif

Gunpowder (black powder) weapons will not be present in Cinzas da criação.[28]

Weaponry such as Potion launchers, Siege weapons and weapons used in Combate naval are based on the arcane arts.[29]

As we said in the past, were not really about that black powder life. Instead it's really going to be focused on the arcane arts: The elements; the use of radiance and darkness; and then those being employed in larger weaponry, such as the type of siege weaponry between ship battles as well as those and sieges. A potion launcher is an example of the arcane energies that can be mastered in order to facilitate these highly destructive alchemical blends that can be created.[29] – Steven Sharif

Certain ships can be hijacked. Naval caravans can not be hijacked. The cargo on a trade ship will be similar to caravans in that the ship must be destroyed in order to capture the loot from its wreckage.[30]

Dynamic destructibility of ships is under consideration.[31]

I mean traditionally if we did not use dynamic destruction, that what we would use is decals to simulate damage on the ship based on an overall hit point value. At certain hit point values we would swap out the mesh to show a more destructive state potentially; and that and you know at that point for a user in regards to immersion you know both are very similar from the immersion factor right?[31] – Steven Sharif

Ships may be repaired but it will be a lengthier process than in other games.[32] 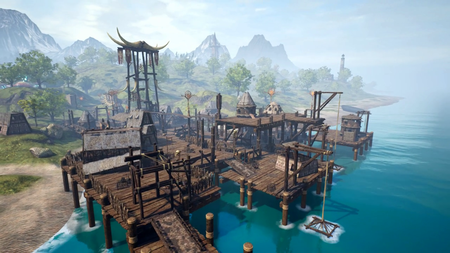 Harbors can appear along the coast as a result of a node being developed on or near to the coast.[34]

There will be harbors that boats can go inside of those will be present along the coast. Harbors can pop up as a result of a node being developed nearby, if it's near the coast or if a node itself is on the coast it can have a harbor component to it. There will likely be quests that are granted from this harbor, specifically with regards to the sea and sea content; and what you can do in this harbor will be a lot of different things including upgrades to the boats.[34] – Steven Sharif 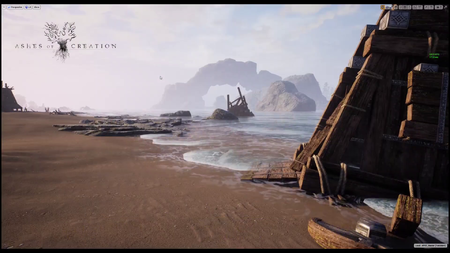 Waves on a beach by Michael Bacon.[35]

There won't be tidal patterns in the ocean, but the ocean will not be static content all the time. Unique content will be represented at certain times with regards to certain climates.[36]