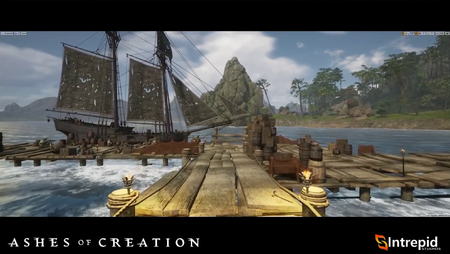 This is actually a dynamic POI. This one will evolve as players evolve the node that it's attached to. So this is kind of its final state.[1] – Jeffrey Bard

New points of interest (such as dungeons, world bosses, and corrupted areas) spawn as nodes develop.[2][3] This content adapts to the node progression of the zone it is in.[1][4]

Certain dungeons and other points of interest across the map will all be affected by the server’s node development. Some dungeons will only be unlocked if nodes are developed to certain stages. The storyline objectives for players inside dungeons will also be dependent on the story arc paths chosen through the node system. The drop tables in area and dungeons will also be tied into the progression of certain areas. For example, let’s say that the humans have developed a node in Region A, and a storyline has opened up that leads players to inspect the ruins (dungeon) of a nearby area. And let’s say that this node was developed in a scientific (crafting) zone… Well before the node developed, this dungeon was accessible… But now the dungeon has propagated new monster assets that include a drop table catering to a crafting emphasis because of the development of that scientific node. And perhaps, a new boss appears in different rooms of the dungeon that includes different adventure quest starts, like a mysterious item with a storyline that can only be progressed if a node develops to the metropolis stage in a certain region, across the world. Our system is so vast, when it comes to interconnectivity and how the world reacts to the players.[5] 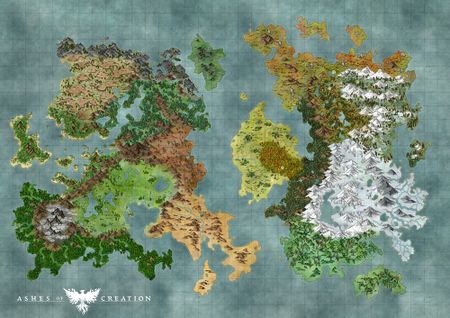 Ashes of Creation map.[6] The circles on the map are divine gateways that are located in the ruined cities of the four great races of Verra. The diamonds are the starting settlements for the returning races.[7]

If you have tuned into our live streams and update videos, you may have caught glimpses of Verra. The world is very large and meant to hold around 10,000 concurrent players. With elaborate trade routes and sea-play, the Verran landscapes must provide complex obstacles and intricate passages between its regions. Alpha One will be the first test phase in the actual world map of Verra. For the first time ever, our community will step foot on the world we hope you'll call home.[6] – Steven Sharif 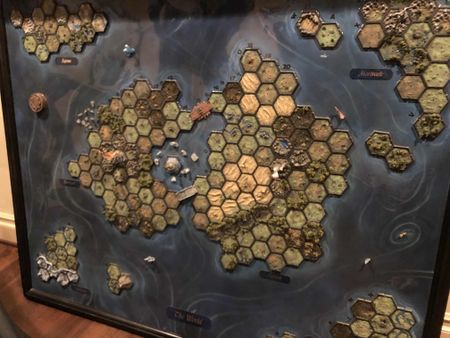 The original Ashes map from my pathfinder world of Ashes made 10 years ago. Obviously some adjustments had to be made for the mmorpg. But the main two continents and their points of interest have a lot of the same.[8] – Steven Sharif

The world of Verra features an in-game viewable world map. This map is not randomly generated, and begins covered in a fog of war.[9] Players will not be able to see the world until they have explored it or gathered information about it. The world is also full of imperfect information, which will require the player to act on it for verification.[10]

For example, you may hear a rumor in a tavern that tells you the location of a cave full of weak Kobolds, but this was not accurate as the rumor was started by well-equipped bandits in order to waylay overconfident adventurers.[10]

When information is gathered, or the player has successfully explored an area, points of interest are marked on the map.[5]

In addition to node progression being a factor on map generation, zones in Ashes of Creation will cater to all levels.[11]

The map will have geographical choke points (such as Mountains) that are not traversable by players.[12]

Even though we're an open-world that doesn't mean that from a design perspective, especially with the way our economic systems work, that we will want to create Geographic choke points.[12] – Steven Sharif 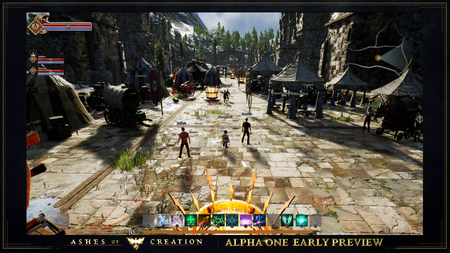 There is no railroaded driven theme park experience here. You will have the opportunity to create your own destiny in that regard, which means you don't have to necessarily follow the quest line nor do you have to participate in events or experiences around the starting area. Now it may be more beneficial to do that; and in that regard I guess there could be a meta around doing that, but you could branch out proceed to other areas and do different content.[14] – Steven Sharif 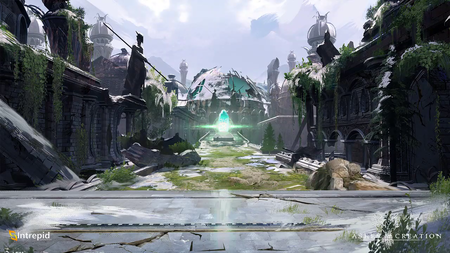 Starting areas (starting zones) are located in the ruined cities of the four ancient races of Verra.[7]

A problem that a lot of MMOs have is that those starting areas become just kind of vacant of players and it's so sad because the greatest aspect of an MMO is that community that you get to experience, so one of the great things about the node system is that it really works from new player acquisition standpoint, where these nodes tend to develop larger near the starting location areas around the world; and it brings these players back to those locations if they're citizens and want services within those cities. So, as new players enter the world they're going to actually be surrounded most likely by more population because people are coming back to those larger nodes.[22] – Steven Sharif 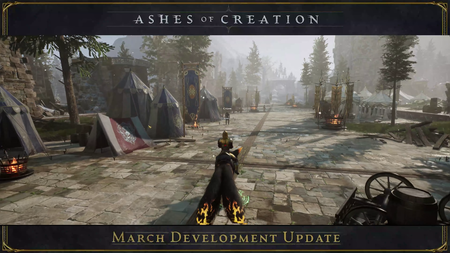 The Alpha-1 starting area is set in the ruins of a Pyrian divine gateway to the south of alpha island.[24] 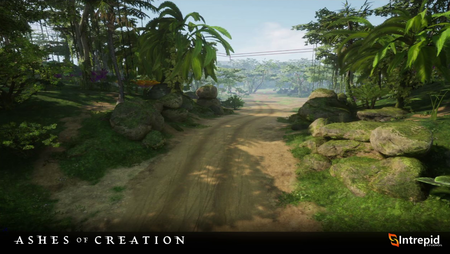 Our road system in-game is essentially driven by pre-placed routes that lead to this main artery of what was once the ancient highway system of Verra; and from there there are roads that become exposed when nodes advance; and we call those veins. They come off the main artery and then as nodes advance there are points of interest as Jeff was discussing earlier. These POIs that exist around the world and some of them share coverage with multiple nodes, but depending on which node advances to the stage that activates the point of interest it'll create these capillary roads so to speak that then stem off of the node itself. So you go from the main artery ancient road that's large- that kind of runs through different zones and whatnot- and that breaks down into the veins that lead to the specific encampments and villages and towns that then spawn off separate capillaries that lead to the points of interest in these areas that are hunting grounds. Those are not exposed initially and they come online as players advance the world.[26] – Steven Sharif

Roads in Verra are both pre-generated and player influenced.[26]

Different seasons and events may affect access to various roads.[28][29][30]

Underrealm routes will open or close dynamically (based on node states).[33]

Propriedades may not be placed in close proximity to roads.[34]

Masmorras and other points of interest are located throughout the map in-between the 103 node locations.[35] 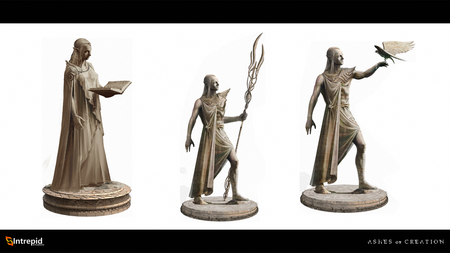 Landmarks are scattered throughout the world, allowing players to judge their position on the map.[36]

From a lore perspective these statues have been around for a long time; and they are representative of the civilizations that existed once on this world before.[36] – Steven Sharif 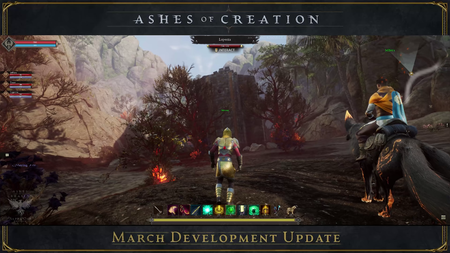 How the world kind of reacts and changes to the nodes, you see these intrusions of corruption beginning to pervert and infest the lands; and these are obviously going to be sources by which NPC events are driven based on player progression within the world. And these sources of evil need to be addressed by the players, or else they'll grow out of hand.[37] – Steven Sharif

All of our POIs and kind of just the world in general can react to the node- we don't have to but we can- and this is one of those places where as civilization grows this will grow kind of in contest with it.[2] – Jeffrey Bard

Corrupted areas (zones/points of interest) can dynamically evolve with the progression of nodes.[37][2]

There are certain things that can happen, such as the spawning of dragons or hordes of zombies that are going to come out and attack those installations, those nodes, those points of interest; and... communities that don't respond to those in an effective way might see the disabling of certain services, the reduction of certain quest lines for particular organizations. The idea is to keep this as part of a believable living response from world, so those can get pretty significant the bad effects that can happen for the community.[38] – Steven Sharif

Underwater points of interest that have NPC structures may appear to be like cities, but they will not be nodes.[41] 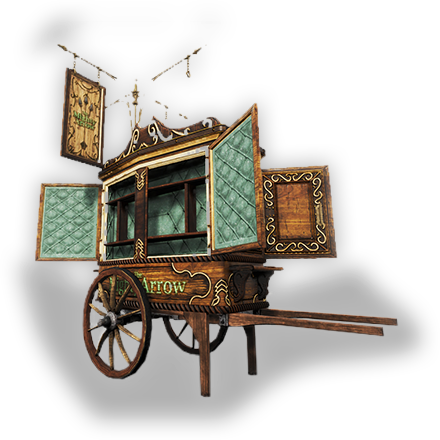 We want our players to have a reason to explore the wilderness, to travel with purpose, and much of that will be driven by our resource system. Transporting these goods might just be more difficult than gathering them. Our regional market system allows players to participate in creating pocket economies that will reinforce the stability of goods in particular regions. Players will be able to move resources and set up shop in other areas to take advantage of the varied markets. With resources spawning dynamically, certain regions will naturally become important trading hubs for the transportation of goods throughout the world.[43]

The whole map would be under the influence of 1 of 5 castle regions. However, castle regions aren't the only TYPE of region - there are also economic regions, among other things.[45] – Sarah Flanagan

Castles have direct power over the Nodes that belong to it, but also have soft power across the entire region it belongs to. All Nodes belonging to that region pay fealty to the Castle in the form of taxes paid directly to the Castle. The Monarch sets the rate, and can use those proceeds to upgrade defenses, maintain the Castle’s direct Nodes, or provide buffs and benefits to the citizens of that region, as the magnanimous ruler that you are.[48]

Castelos da guilda influence a castle region around them.[49]

Castelos da guilda impose a tax on all revenue for the nodes within its region.[53][54]

Castles have the ability to allocate taxes collected from nodes under them toward certain benefits that go back to the node. Or they can be more selfishly governed that treasury more towards the guild that owns it and that obviously is going to have some political implications, because it could- if you're not using it for the benefit of the people in the region they might rise up and help take you out from that that position of owning that castle.[53] – Steven Sharif

Battlegrounds are where Pvp battles occur in the open world.[64] These are open world PvP zones that flag players as Combatants (purple).[65]

Non-combatant (green) players entering an open world battleground are automatically flagged as combatants and remain flagged for a period of time after leaving that battleground.[5]

Death penalties do not apply to objective-based events (such as caravans, guild wars, and node sieges).[71]

Our castle system, our sieges against nodes, the caravan system, battlegrounds that exist, guild wars: We want there to be a meaning to this conflict. We want players to actually have some skin in the game when it comes to participating in PvP.[72] – Steven Sharif